General Information of the Snow Leopard

The Snow Leopard are found 3,000 to 5,500 metres above sea level on the mountain ranges of Central and Southern Asia. These animals have a life span of 15-18 years and 21 years in captivity, however they happen to smaller than most big cats. They can range from a large variation of sizes: 27-54 kg, 75-130 cm in length and a tail of 75-90% of that length. Snow leopards have long thick fur that varies from smoky grey to yellowish tan and white underparts; they have dark grey to black open rosettes on the body with same coloured spots on their heads, legs and tails. Unusually amongst cats, they have pale green or grey eyes. Snow leopards all show characteristics of adaptions to live in a cold mountainous environment: bodies are stocky, thick fur, small rounded ears, fur on underside, and the tail has thick fur, all these help to minimize heat loss; to help them to walk: they have wide feet for snowy surfaces, the fur on the underside also increases their traction on steep/unstable areas, the tail is long and flexible to help to keep their balance.  Unlike most big cats they cannot roar due to an absence of the larynx, however their vocalizations happen to include: hisses, mewing, growls, wailing and chuffing. They are not aggressive even if another leopard 'invades' their territory; they are crepuscular (meaning that they are most active at dawn and dusk). They are carnivorous however they may eat vegetation e.g. grass and twigs unlike most cats.

How many are left and why are they endangered?

Snow Leopards are rare and secretive living in a remote environment, therefore it is difficult to count them accurately however it has been estimated of around 4,000 to 6,600 left in the wild according to McCarthy in 2003 (see table below) and 600-700 in captivity. A constant threat of poaching for their fur and a lack of food has forced a conflict with humans. The snow leopard eats a diet of mostly meat, so its forced to go to lower lands to feed on livestock (mostly goats) however the herders may kill the animal even though the cat is easily driven away. The I.U.C.N. have put the snow leopard on the Red List of Threatened Species, as globally endangered, in 1972 and a similar threat category in 2008.

Many agencies like R.H.N. are working to help conserve these beautiful creatures, the focus is on research, community programs in snow leopard regions and educational programs to help teach villagers and herders how to treat snow leopards. There are now protected areas in most of the countries that contain snow leopards. 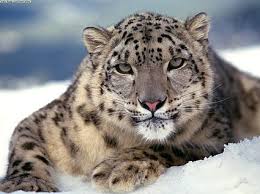