Polar bears are only found in the Arctic regions of , , ,  and . They are very strong swimmers and will swim 60 miles just to get to food. They are the world's largest land carnivores, a typical male would weigh around 350-680kg; and are 2.4-3 metres in length. A typical female would be 150-249kg and 1.8-2.4 metres, and half the size of the male. They have a keen sense of smell and are able to smell their prey up to 1.6km (nearly a mile) away, their hearing is about the same as a human and have reasonable good long-distance vision. Their white coat becomes yellowed with age, however in captivity in a warm atmosphere, its coat may turn a pale sheen of green due to algae growing in the guard hairs. Their diet consists of only ringed and bearded seals, these seals provide blubber which is essential for keeping warm, their hide and very thick coat makes the animal overheat at 10 degrees Celsius.

The bear has 3 hunting methods: the most common is 'still hunting', this is smelling the seal's breathing hole and remaining in silence near the hole; once the seal exhales, the bear smells it and drags the seal up from the hole. The second is stalking seals resting, here the bear crouches 91 metres away, if the seal is still unaware, the bear creeps closer until it is around 9-12 metres away and suddenly rushes forward to attack it. The third method is raiding birth lairs that female seals create in the snow. These species of bears are cautious and rarely attack humans unless provoked or very hungry. 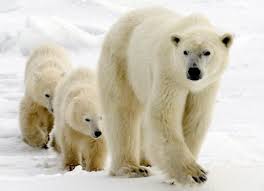 Due to rising temperatures, the Arctic ice has started to melt at a disastrous rate. Polar bears are found to swim out into open seas to just find food. These journeys put them under threat from exhaustion, hypothermia or being swamped by waves. The drownings are having a huge effect on the numbers of polar bears; their numbers have dropped by 22% since the 1980s; and there are now only 20,000-25,000 left in the world.