General information on the shark
Around the world, sharks are known for their "ferocity" and "terror", people see all sharks as a replica of Jaws. Globally humans see them as monsters and are not willing to give up this thought as we are scared. This is not what this astonishingly prehistoric evolved creature should be known for! Their true acriments are their amazing hunting abilities, fast swimming and exhilarating jumps. The fact is that more people die from car accidents than shark attacks. Only around 1-2 people are killed by shark attacks annually. 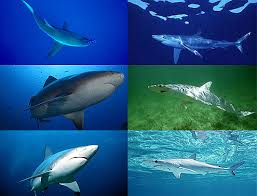 A reason of why some sharks are endangered and some on the verge of extinction is because of habitat destruction. Mangroves are used for breeding grounds, reproduction and shelter; however coastal development of resorts and golf courses destroy the mangroves.
Commercial fishing for their fins and tails for restaurants and the black market also greatly endanger these mystical oceanic creatures. The shark is caught and the fins are cut off even if the animal is still alive and then thrown back into the sea as 'useless waste'; this is known as 'finning'. The fins are popular Asian food for tourists as they are made to shark fin soup. Sadly only a small minority of countries have introduced restrictions on finning ( they happen to include: Canada, Brazil, USA, Spain and Costa Rica).
Another threat to their existence is trawler fishing. This is where a boat sets up a huge, long net across a large area. Because of this, many sharks become entangled accidentally in these nets and starve to death. However if they happen to escape there is a shortage of food due to the 'ocean going fish factories'. 100,000's of sharks are killed annually devastating the total eco-system of the ocean, "if one ship goes down, they all fall". "We must remember that we entered the sharks' home, we are the intruders."
Article by RHN. 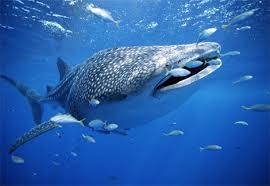 General information on the hawksbill turtle

The Hawksbill turtle is a critically endangered animal and under serious threat. They are found in the Central area of the Atlantic Ocean and the whole of the Pacific Ocean. They live on jellyfish and scrubs such as sponges on the seabed. They are fascinating creatures as they are able to change their shell's colour according to the temperature of the water.

Scientists have discovered that this species can digest highly toxic substances in sponges, the sponges also contain high concentrations of silica, therefore this makes the turtle one of the very few animals capable of eating siliceous organisms. Some can grow to 1m in length and 45-75kg in mass. They are found in the tropical reefs of the Indian, Pacific and Atlantic Oceans.

The flesh of the creature is a delicacy and is poached by the Chinese/Japanese. Over 45,00 kg is exported in Japan. Also their shells are primary sources of the 'tortoise shell' material which is used for decorative purposes. Only 15,000 at maximum remain. General information on the Dolphin/Purpoise

An example of a dolphin that is endangered is the Pink Dolphin which its habitat is in the Amazon Rainforest. It is being wiped out because of chemicals being dumped in its waters, excessive boat trafficking and also of being accidentally caught in fishing nets. According to the International Society for the Preservation of the Rainforest says that the dolphin has a 40% larger brain than a human!

An unique characteristic of the dolphin is that it is capable of turning its head 180 degrees due to a fused vertebrae in the neck. Blood capillaries near the skin gives the mammal its pink appearance.

The general reasons of the endangerment of the common purpoise are the same of many sea creatures whom face a clash with fishermen, they get caught in fishing nets, the unintended catch, the spectator to the decline of fish stocks- this time they are the stock. Other known causes of endangerment are black market trading and chinese remedies.