Found in the southern parts of the Malay Peninsula, this tiger forms the third largest population of tigers in the world. There are counts of roughly 500 left in the wild but the tiger was not classified as a subspecies until the year of 2004. It is the second smallest subspecies, and a male has an average weight of 120 kg and is roughly 2.37 metres in length and a female averaging about 100 kg and 2 metres in length. Their main prey consists of deer, sun bear and wild boar. Roads being built, logging and conversion of forests to agricultural land gives a threat to these tigers' habitat; to add to this, the tigers are then put into contact with livestock- this causes conflict with the villagers, as loss of livestock due to tigers counts up to $400,000 which is a huge amount for poor farmers.

This tiger is found on Malaysia's coat of arms and as logos of Malaysian institutions such as Maybank.

This tiger is only found in the Indonesian island of Sumatra, and is critically endangered. It is the smallest of the subspecies, males have an average mass of 100-140 kg and females have an average mass of 75-110 kg. Sumatra provides malayan tapirs, wild boar, sambar and munctjac as prey. Their small size has a reason: adaptation to the dense, thick forests and the smaller prey. The wild population is estimated at only 400-500; recent genetic testing has shown that they have an unique genetic marker which means that they are able to separate into a new subspecies if not made extinct, therefore this makes a top priority to conserve this subspecies, over the others, enabling it to evolve. Habitat destruction is the main cause of the declining numbers of illegal logging even in the protected parks, however there have been reports of 66 tigers shot and killed between 1998 and 2000, effectively 20% of the population. 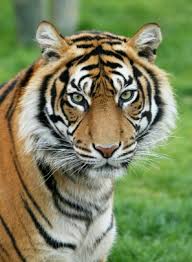