General information on the Mountain Gorilla

The Mountain Gorilla is one of two subspecies of the Eastern gorilla. They live in the cold, misty climate of Central Africa, spread out across the borders of Rwanda, Democratic Republic of Congo and Uganda. They can weigh up to 400 pounds inducing territorial behaviour. Despite their size studies show them to be very gentle and calm.

The mountain gorilla has long dark hair enabling it to travel through cold climates reaching an overall temperature of up to 0 degrees Celcius. Males can often weigh twice that of a female reaching up to 266 kg. The Silverback gained the name after scientists discovered a cluster of grey hairs form on their back as they grow older, hence naming them Silverbacks. Standing tall, the mountain gorilla can reach a height of up to 1.9 m with an arm span of 2.3 m. The mountain gorilla is very territorial and quadrupedal. At times it may climb up into trees to gather fruit. Their arms are no longer than their legs, therefore causing them to walk on all fours, however the differential factor that separates them from other great apes is that they walk on their fists instead of their palms. Like humans they are diurnal, meaning that they are most active during the day. Many of these daytime hours are spent eating and foraging to maintain their bulk and at night only the infants sleep in the mothers nest. 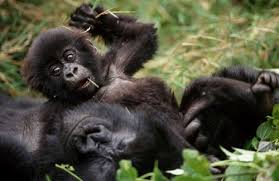 The mountain gorilla is mainly a herbivore, its diet mainly consisting of shoots and stems, roots, fruit and bark. Males can eat up to 34 kg of vegetation a day, in comparison to a female's 18kg. The gorilla spends most its time foraging for food in the Hagenia forests situated at about 2,800-3,400 metres altitude. Newborn babies weigh around 1.8 kg when born and spend the first few months of their lives in very close contact with mother. They gain the ability to walk at about 5-6 months old and after 8 months it can ingest solid food. Amazingly males only properly start to breed at the age of 15, leaving females with 2-6 infants over a 40 year period.

The mountain gorilla is affected devastatingly by poaching and habitat destruction and are classified as critically endangered by the I.U.C.N. Red List of Endangered Species. On the contrary, conservation efforts have thrived as new regulations have come in and anti-poaching rangers provide safe haven for these magnificent creatures.

General information on the orangutan

The orangutan is exclusive to the rainforests of Malaysia and Indonesia. Known for their intelligence and close human relations, the orangutan is one of the most intelligent of the great apes, using the most sophisticated forest tools. Orangutans are non-violent animals and live a solitary life gathering food and building nests high up in trees.

The orangutan can reach a height of 1.5 m and can weigh anything between 33-110 kg. their feet have four long toes and an opposable big toe. They have large bulky bodies made to manoevre through trees. Adult males tend to grow cheek flaps that shows dominance towards other males. The orangutan can live up to 50 years in the wild.

The orangutans diet mainly consists of fruits with fatty or sugary pulp. Ficus fruits are prefered as they are easy to digest. Despite this the orangutan can eat up to 317 different food items including leaves, bark, honey and insects. Orangutans' high level of intelligence means they can learn about certain foods that combat illnesses such as commelina (used for anti-inflamatory balm).

The Sumatran orangutan is classified as critically endangered along with the Bornean orangutan which is classed as endangered by the I.U.C.N. Red List of Endangered Species. The threats to the orangutan include severe habitat destruction to make way for palm oil plantations and poaching for traditional medicines, to keep the babies as pets or just for bushmeat. General information on the bonobo

The Bonobo was originally called the pygmy chimpanzee, after Heinz Heck and Edward Tratz; this was a new and separate generic term for the pygmy chimpanzee. They are exclusively found in the democratic republic of Congo and are believed to share a staggering 98% of our human D.N.A (known to be more than the gorilla). It is believed that human ancestry and Bonobo (chimpanzee) converge just 7 million years ago.

They are considered to be more gracile than chimpanzee's, females often being considerably smaller in size. They have smaller heads than their close relative's (chimpanzee) having slighter brows. They also have pink lips, small ears and a slim physique. They are known to spend 25% of their time walking upright. Bonobo's are known to feel compassion, kindness, patience and sensitivity. Unfortunately the common chimp male often attacks lone Bonobo male's, in many cases killing them. This indicate's the bonobo's sense of peace unlike their aggressive neighbours.

The bonobo lives in the heart of the Congo's forests, building nests  and maintaining a simple diet of nuts, fruit, seeds and insects. It is said that there are less than 10,000 living south of the Congo River.

The Bonobo are classed as endangered by the I.U.C.N Red List of Endangered Species due to poaching, habitat destruction and local conflict. Conservation efforts in Congo include introducing an 11,000 square mile national park, bringing in anti- poaching rangers to restrict the illegal activity of poaching and selling on to the black market and creating educational programs to raise awareness to the general population on the issue. Estimates say within the last 30 years the bonobo's numbers have decreased from 60,000 to just 5,000. Within the next 15 years, if not aided by us, the bonobo will simply be wiped out.