General Information on the Giant panda

The Giant Panda (who's Latin name has the literal meaning of "cat-foot black and white"), is in the bear category, native to South-western and Central-western China.  It is considered, by many, to be a conservation reliant species. Males can weigh up to 150 kg and can grow up to 1.5 m tall. They live in the mountainous regions of Sichuan, Gansu and Shaanxi. They have the same body of their relative "the bear", but having black and white fur. It is a mystery why these magnificent creatures have black and white fur, but scientists speculate it is to blend in with the rocky terrain. They have warm wooly coats to ensure warmth in the winter and have powerful molar teeth to grind up bamboo. 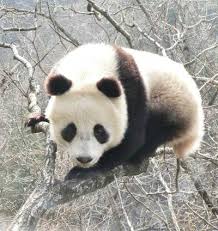 Despite having a taxonoic classification as a carnivore, it is very much so reliant on bamboo. It has a carnivorous structured gut meaning it has difficulty deriving nutrition from the cellulose based bamboo. In order to fulfil its dietary needs the giant panda has to consume 9-14 kilograms of bamboo every day, amazingly it avoids social interaction and steep slopes to avoid unneccesary energy use. No-one understands exactly why pandas choose to eat a low nutrition based plant, but it remains a potent question.

The Giant Panda is a terrestrial animal that primarily spends its life roaming the Quinlin mountains in search of bamboo forests. Despite their lazy appeal, pandas can act very territorial leaving urine and scratch marks on trees to indicate their territory. They rely on spatial memory as apose to visual memory and will move to areas of higher humidity as they do not hibernate. In the brief breeding season a male will find a female and then will leave her to raise the cub on her own.

The panda is troubled by habitat loss and a low reproductive rate causing it to be classed as endangered by the I.U.C.N. Red List of Endangered Species. Since being discovered the Giant Panda has been poached for high class westerners to be used as fur coats and rugs, but time has seen some heavy crack downs that limits this problem greatly, and ensuring a future for the Giant Panda. However Giant Pandas rely on human help even though if they were not poached; this is because as they are too lazy to reproduce or to look after their young, they are dying out. Therefore this shows that conservationists need to help raise Giant Pandas in captivity and introduce them to the wild.