General information on the Sun Bear

The Malayan Sun bear is one of the smallest bears in its genus. A full grown adult male will grow up to roughly four feet whilst standing straight on its hind legs, but despite the bears small size it can pose a threat to any larger predator. It weighs a mere 64kg or 140 pounds and can grow up to 1.2 - 1.5m tall. The average sun bear has a life span of 25 years and the females usually have 2 cubs after 3 and a half months of gestation.

The bear originally got its name from having a U shaped golden crescent on its chest. The bears are omnivores, using their long claws to dig for honey and grubs, which they eat with their long tongues. If they cannot find any grubs they will go for any small reptiles or rodents. They are very rare to tropical rainforests of southern China, Burma, Malaysia, Sumatra, Laos, Cambodia, Vietnam, and Borneo.The bears rely on their good sense of smell as their eyesight is not so good.

The Malayan sun bear is suffering greatly from deforestation and habitat loss. The sun bear comes into great conflict with human activities. One example of this is when food sources run out due to manmade measures, the bears are forced onto agricultural land and are mostly shot or trapped by protective farmers. Poaching is another major issue for this bear due to local spiritual beliefs that the bear contains medical healing powers. They are classed as endangered; it is thought that if we do not act, within 15 years this wonderful species will be extinct. 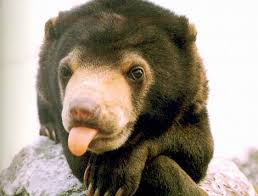 General information on the Spectacled Bear

The Spectacled Bear (also known as the Andean Bear) lives in the high mountainous areas of the Andes. They are the last short faced bear known to still be living. Its closest living relative is in fact the Florida Spectacled Bear; a species also on the verge of extinction. Males can weigh up to 130-200kg whereas females can only reach up to 82kg.

They are known to live in the mountainous areas of South America including Colombia, Ecuador, Peru, Bolivia and North-Western Argentina. They are the last surviving native species of bear known to be living in South America; their survival dependable upon their ability to climb very tall trees. Often the males build a nest high up in the trees where they will often rest and stay out of danger. They can be easily distinguished from other Andean bears due to their beige coloured markings on their heads and chests. They are non-aggressive animals but will attack if the intruder is a threat or the mother's cubs are in danger; however there are no recorded deaths by South-American governments. 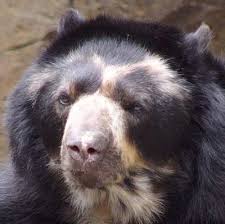 The spectacled bear has that of an unusual diet consisting of just 5% meat (small mammals) and the rest fruit. Therefore when the bears scavenge through farmers' cornfields, this often results in them getting shot. This is just one cause of the clashes between the bears and civilisation.

Other causes are by: a belief by locals that the bears will try and will eat livestock however this belief is false as these bears do not eat large quantities of meat; their gall bladders have high values in international markets and play a part in traditional Chinese medicine therefore giving poachers opportunities to hunt them; a final cause is a loss of habitat by extensive logging and farming done by deforestation.

If we aid the locals in education that the bears do not seek to eat their livestock; fund training for anti-poachers and pose bans on deforestation where there is known spectacled bear territory, we can save them as one. 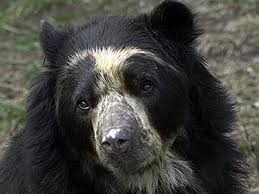