The California Condor
General information on the california condor
The california condor is one of the worlds largest living birds with one of the heaviest wingspans reaching an astonishing 3m in length. It is also one of the worlds longest living birds with a massive lifespan of up to 50 years. They are said to be closely related with the vulture, with a large black body and bald head ranging from red to yellow dependant on mood. An average California Condor can weigh up to 14 kg however due to most measurements being taken in captivity a rough approximation can be as accurate as you are going to get of the condor in the wild. 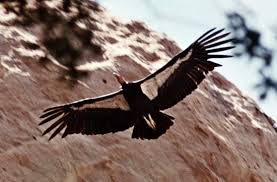 The condor scavenges for food, its proffered choice being carrion (dead animal carcasses). Despite belief that vultures and condors are dirty ugly pointless birds studies show that without vultures and condors many eco-systems around the world would be affected devastingly as the condors have a very acidy stomach killing of any bacteria and disease from the carcasses and putting it out the other end clean. If we did not have these birds to provide this survice many species would eat the diseased carcasses and spread disease, devastating the local ecological systems. These bids are also very beautiful with a sleek flying pattern.
Causes for endangerment
However in recent years condor numbers dropped drasticly due to lead poisoning, poaching and habitat destruction. A conservation plan was desperatly needed. Finally one of the most expensive conservation plans ever made in the US was set up where the remaining condors were captured and introduced to a breeding program at san diego wild animal park and the los angeles zoo. They have been introducing them back into the wild ever since. But still only 387 condors are know to be living in the wild, 188 of these in captivity making them the most endangered bird on the planet.
Article by RHN.