General information on the bonobo

The Bonobo was originally called the pygmy chimpanzee, after Heinz Heck and Edward Tratz; this was a new and separate generic term for the pygmy chimpanzee. They are exclusively found in the democratic republic of Congo and are believed to share a staggering 98% of our human D.N.A (known to be more than the gorilla). It is believed that human ancestry and Bonobo (chimpanzee) converge just 7 million years ago. 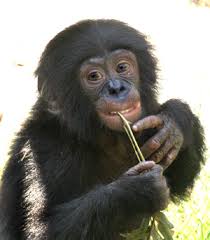 They are considered to be more gracile than chimpanzee's, females often being considerably smaller in size. They have smaller heads than their close relative's (chimpanzee) having slighter brows. They also have pink lips, small ears and a slim physique. They are known to spend 25% of their time walking upright. Bonobo's are known to feel compassion, kindness, patience and sensitivity. Unfortunately the common chimp male often attacks lone Bonobo male's, in many cases killing them. This indicate's the bonobo's sense of peace unlike their aggressive neighbours.

The bonobo lives in the heart of the Congo's forests, building nests  and maintaining a simple diet of nuts, fruit, seeds and insects. It is said that there are less than 10,000 living south of the Congo River.

The Bonobo are classed as endangered by the I.U.C.N Red List of Endangered Species due to poaching, habitat destruction and local conflict. Conservation efforts in Congo include introducing an 11,000 square mile national park, bringing in anti- poaching rangers to restrict the illegal activity of poaching and selling on to the black market and creating educational programs to raise awareness to the general population on the issue. Estimates say within the last 30 years the bonobo's numbers have decreased from 60,000 to just 5,000. Within the next 15 years, if not aided by us, the bonobo will simply be wiped out.